A distinguished doyen of architecture from India, Raj Rewal has, for long, set global precedents with his urban narratives of design that have been integrally and richly steeped in their contextual inferences. The concerted juxtaposition of traditional concepts and contemporary syntax is reflective of his fascination for weaving expressions of heritage and history into a modern vocabulary, often revealing layer upon layer of intuitive interpretation and deep meaning. Effortlessly threading together episodes of design, he merges scale with surroundings and geometry with rhythm; binds space with structure and nuance; modulates form and light, and courses the exterior through the interior to create a series of interconnected experiences as distinct from each other as they are together. Through a repertoire of residential, housing, public and institutional buildings, his work is characterised by his concern for the climate, the creation of humane architecture.

Educated in Delhi and London, Rewal worked in Michel Ecochard’s office in Paris before initiating his practice in New Delhi in the sixties. Spanning over five decades, Raj Rewal’s architecture is that of ambition and hope, duly exploring space, form-making, structural and construction ingenuity and material possibilities; forever seeking new horizons in his distinct, personalised idiom — an amalgamation of tradition and innovation.

Raj Rewal and Ramsharma founded Architectural Research Cell for carrying out the works of the Festival of India, Paris, 1986 and co-curated the exhibition.

Raj Rewal was responsible commissioner for the part on Traditional Indian Architecture, involving a portfolio of measured drawings of Fatehpur Sikri, Jaisalmer, Datia Orchha, stepwells, Jantar Mantar observatory etc. These drawings were prepared in his office.

He has been awarded with honorary doctorate by GD Goenka University and Poornima University. 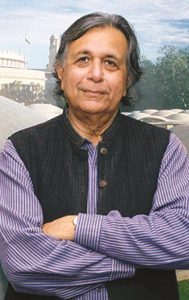