Citation Robert Mathew Award from the Commonwealth Association of Architects.

“The work of Raj Rewal is a remarkable sequence of buildings, ranging across a wide spectrum of building types in which there is evidence of deep understanding of traditional Indian architecture and the development of a contemporary language which has strength and beauty and is both functionally satisfying and climatically appropriate.”

Citation from the Indian Institute of Architects Gold Medal award

“Although Rewal’s architecture is inspired by the rich traditions of Indian Architecture, he has evolved a new synthesis through innovation.”

“Raj Rewal’s architectural language shows that the essence of traditional wisdom can be fused with technology of our times to create humane, ethical and sustainable architecture. It is evident in his works that passive energy saving systems can go hand in hand with renewable energy technology to create a new language of architectural design.”

The exploding population and the emergence of a new middle class with very large numbers has posed serious urban crisis of traffic jams and pollution. At the same time the last four decades have seen the emergence of institutes of technology, complexes for research and education and other building types on a gigantic scale, which can be described as ‘epic’ works, somewhat between urban scale and architecture. Creation of a humane habitation for very large numbers at low cost has been an exceptionally difficult problem for a long time. Our works are based on meeting these challenges.

We have always believed that Rasa the essence, ambiance and flavour of each building type should be evolved from its site, programme and cultural concerns keeping in mind the problems of traffic, pollution, sustainability and global warming. Responding to these situations we have drawn upon the architectural vocabulary which consists of structure and light, modulation of spaces, materiality and craft to enhance humane values with sustainable design.

Structural Systems are based on ever changing innovative technologies of our time, but spatial enclosures based on passive energy control systems of shaded interlinked courtyards draw inspiration from traditional heritage. However the idea of rasa, which instils joy of living and impacts emotions, is a magic potion in the minds of an architect, part of creative process, which can express symbols for public and sacred buildings taking into consideration concerns of community and humane values. 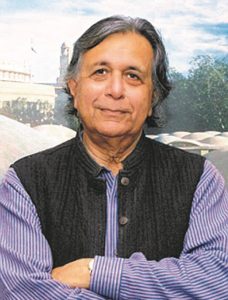